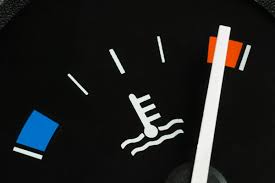 One of the gauges on the dashboard of your car monitors the temperature of the engine. A quick glance will tell you if the temperature is within the range that is “normal” or “safe”. It’s not unusual for the temperature to increase somewhat if you are pulling a heavy load or climbing a steep hill, and there is no danger as long as it stays within the safe range. But when something is wrong with the cooling system and the engine temperature climbs into the danger zone, it means you need to address the situation immediately or you will soon find yourself stopped on the side of the road watching steam pour out from under your hood, thinking "this can not be good!"

This is a good metaphor for how we handle conflict in our relationships. Invariably, in every relationship, things heat up a little now and then, but as long as the conflict consistently stays in the “normal” zone, the relationship will be healthy. However, if things regularly move into the “hot zone”, you will end up incurring major relational damage. Several years ago I read an article on the “5 Levels of Conflict”. The premise of the article is that there are several levels of conflict and one of the characteristics of a healthy relationship is that the vast majority of the conflict stays in the “safe zone”. Rarely do things heat up and escalate and move into the “danger zone”. The first level is “discussion.” At this level, the stakes are low, the emotions are barely engaged. You are simply having a discussion – Wendy’s or McDonald’s? Chinese or Thai? Tension is minimal. You can listen to the other person and have no problem seeing things from their perspective. Beyond that, it is relatively easy to change your position or look for ways to accommodate the other party because you aren’t emotionally invested. The second level is “debate.” Now there is a difference of opinion and you are attempting to persuade the other person of the “rightness” of your position. The emotions are engaged, at least to some degree; but you are still in control of your emotions. You have taken a stand and changing your position is not easy, because you would have to admit you were wrong, or your position was not as sound as the person who you are in conflict with. The third level is “disagreement”. Here the emotional intensity is ratcheted up another notch. You feel strongly about the position you hold, and can’t understand why the other party can’t see things from your perspective. The volume increases, as does the level of frustration- and it’s ok! At this point the disagreement is still centered on the presenting issue and you are still looking for ways to resolve the conflict in a way that preserves the relationship.

Every normal, healthy relationship experiences these three levels of conflict. This is the “normal” zone. Discussions, debates and even disagreements a normal part of life. They are even necessary because they allow both parties to express their feelings and desires. Marriages, business partnerships and teams are healthier when conflict is worked through in a way that is appropriate. You don’t have to agree, but you do have to find a way to work through the conflict so that it does not escalate to the next level, which signals a move into the “hot zone” or the “danger zone”.

The 4th level of conflict is “fighting.” Now the emotions are fully engaged. The object is not to simply change the other person’s mind, but to inflict emotional damage on the other party. The conflict quickly moves from the presenting issue (debate/disagreement) and becomes a personal attack. Whether you are conscious of it or not, the real goal is to inflict some measure of emotional pain on the other party, and so we choose words or actions that we know will have the maximum impact. The conversation is littered with hyperboles such as “you always” and “you never”. Past disagreements are recycled and re-introduced into the current conflict. At this point things are said and done that leave lasting emotional scars and wounds. Although apologies are often made, the damage has been done. Unfortunately, in many relationships, conflict blows through levels 1-3 and quickly escalates to level 4. One of the tell-tale signs of unhealthy relationship is that everything quickly becomes a fight. The reality is that relationships cannot be sustained if conflict automatically moves to this level. At some point it will move to level 5.

Level 5 is what the author calls divorce or disengagement. At this point the conflict is so painful that one or both parties say “I can’t do this anymore”, and withdraws. The relationship is severed. It may be a marriage that ends in divorce, a business partnership that is dissolved, or a family relationship that is estranged. The end result is that one or both parties pull back, and isolate themselves from the other party as a way of protecting themselves, and sadly, the relationship crumbles- all because conflict was regularly allowed to escalate into the danger zone rather than being resolved at a safe level.

The challenge we face is that patterns are quickly established in a relationship and once established, they are difficult to break. All too often conflict quickly and inevitably escalates to level 4 (fighting). If this is the case, the relationship will be dysfunctional at best; and in all likelihood, will ultimately end up moving to level 5 (divorce/disengagement).

On the other hand, healthy relationships are made up of individuals and parties that have resolved to work hard at keeping the conflict within the “normal” or acceptable range. It requires the ability to listen well, even if you don’t agree; to work hard at seeing things from the other’s perspective, and to keep the conflict centered on the issue rather than allowing it to become personal. While it might be challenging at times, in the long run it will be worth it. Like a well-maintained car, your relationships will keep moving forward, providing you keep your eye on the temperature gauge and not allow conflict to consistently move into the hot zone.