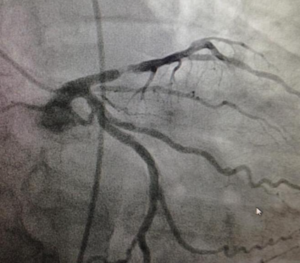 Today is a good day! It’s a beautiful day in the Pacific Northwest. The sun is shining, the birds are chirping, the spring flowers are up. All in all, it is one of those, “It’s good to be alive” kind of days. I am relishing it even more than usual because 3 weeks ago I had a heart attack, or so my doctor tells me.

Some of you know the story. In fact, this blog could/should be entitled “What not to do when your chest feels like it’s in a vice and your left arm feels like it’s going to explode.” Let me give you a bit of my medical history. I had been feeling crummy (I actually used another word) for several weeks prior to January 28th. I had gone from working out 5 days a week to the point where walking around the block left me short of breath and feeling pain in my chest. After several doctor appointments and a battery of tests, my cardiologist informed my wife, Kim, and me that he was pretty sure there was a blockage in one or more of my arteries and he scheduled me for an angiogram on Thursday, Jan. 29th. By Monday of that week, I couldn’t wait for Thursday to come. I wanted my life back.

On Wednesday, Jan. 28th, I was home alone, vacuuming (never again!!!!) when I began to experience the chest pain and the throbbing arm pain that I had become all too accustomed to. I popped a nitro pill and thought “I can finish the vacuuming.” Almost immediately the pain returned, and continued to intensify, so I popped a second nitro. When the pain in my chest kept building, I took a third nitro and thought, “maybe I should call 911. Naa, I will call Kim at school, and if it’s still hurting, she can just drive me to the hospital.” After about 20 minutes, I finally got a hold of her and I said, “I don’t think this is anything to worry about, but maybe you should come home and we can go get it checked out.”

But wait, it gets better! We arrived at the hospital and I looked into the emergency waiting room and I saw a room filled with sick people. And I am not sick, right? (Just chest pain and a throbbing left arm.) So we pulled into a parking stall and Kim said, “Are you going in?” To which I replied, “I think I am feeling a little better, let’s just wait to see if it passes.” Then I said, “You know, if I put my left arm over my head, it doesn’t hurt so much. That has to be a good sign, right?” And so, after waiting for a few more minutes, I made the brilliant decision that I really didn’t need to go in; and so we headed back home. That night we barbecued, had friends over and got ready for the next morning.

The next morning I went in for the procedure, and casually mentioned all of this to the nurse who was prepping me. I could tell he was “intrigued” by my story when his eyes got big and eyebrows arched above his forehead and his nostrils flared. He immediately told the cardiologist who ordered another batch of tests, which confirmed his suspicion that I had in fact suffered a “significant cardiac event” – aka a heart attack the day before. They did the angiogram, found that one of the primary arteries (the one known in cardiac circles as the “widow-maker”) was 99% blocked. The blood flow to a significant part of my heart had been reduced to a trickle. They put in a stent, and now the blood is flowing once again!

The Doc ordered an ultrasound to see how much damage my heart had suffered, and much to his amazement, it showed absolutely no damage. My ticker was ticking just fine. He ordered another test 12 hours later just to be sure, and the test revealed the same result… no damage done.

The next week we were meeting with Dr. Cheung, the cardiologist and he said, “Dave, you are one lucky man. You must have had a bunch of people praying for you last Wednesday, because this could have very easily had a very different outcome.” I wish I would have said something insightful like “Well, I am blessed because I have a lot of people praying for me every day!” But to be honest, I think I just smiled and said “Yes, I must have.” So, if, for some strange reason you were praying for me on Wednesday, Jan. 28th, I owe you a huge thank you!

So, now I am back working out at the gym, and embracing my new heart-friendly diet, which consists of various kinds of twigs and berries, and I am trying to figure out what all of this means. I have been thinking, processing and praying, and here’s what I know for sure. In fact, I have boiled it down to a simple algebraic equation: P + D = S where P= pride, D= Denial and S= Stupidity.

Many people, including my doctor have asked “Why didn’t you call 911?” And even better, “Why didn’t you come in when you got to the hospital???” Two words: pride and denial, which together resulted in some pretty stupid decisions.

I realize now that it was pride that kept me from calling 911. I didn’t want the ambulance rolling up in front of our place and be the guy that gets carried out on a gurney in front of the whole neighborhood. I know, it sounds so… prideful? Stupid? (You can fill in the blank!) You’d think by now, I should have known better. For the better part of this past year, I had been working with a counselor to address this thing called pride. I had come to realize how much of my “shadow side” was fueled by this thing called pride. Pride is a lot like that plaque that was building up in my artery. It was slowly choking the life out of me and I didn’t even realize it, until it was almost too late. I began to see how much pride had ruled my life; how important it was to me to be perceived in a positive light by those around me. At times it has kept me from acknowledging my limitations. It has kept me from admitting that I need help. At times it has kept me from accepting responsibility for something and has caused me to shift the blame on to others. Pride kept me from dialing 911 and saying “I think I might be having a heart attack. Do you think you could send someone over to give me a ride to the hospital, if it’s not too much trouble?” Pride unchecked is a dangerous thing.

But so is denial. What makes someone sit in the hospital parking lot, and choose not to go in, even though their chest feels like it is being squeezed by a boa constrictor and their left arm feels like it has just been hit with a Tazer? One word: denial. I distinctly remember sitting there thinking, “I can’t be having a heart attack. This sort of stuff happens to other people, not me.”

Over this past year I have discovered that I am the type of person who is “pain-adverse”. I am an enthusiast, and I want my world to be filled with positive, pleasurable experiences. And when it’s not, one of the ways I handle it is to convince myself that it’s not “really all that bad.” When we live in denial we refuse to see things as they really are; instead we “see” them as we want them to be. (If I put my arm over my head, it doesn’t hurt as much!!)

When we live in denial, we refuse to deal with unpleasant situations; believing that it will somehow get better if we just ignore it. There have been times when I have avoided having a hard conversation with someone, and managed to convince myself that it really wasn’t necessary. There have been things in my life that I knew needed to be changed, but I didn’t want to admit it. I have come to realize that denial isn’t positive thinking, it’s just being delusional. The reality is, it is possible, even likely that at some point along the way, we will have to deal with something hard, unpleasant or worse. And the sooner we see it for what it is, the better we are able to face it and work through it.

But I have also come to realize that G (grace) is > greater than either P or D. I am grateful that God, for reasons known only to himself (grace), chose to spare me from experiencing the full consequences of my prideful stupidity. I’m not lucky, but rather, I am incredibly blessed. And I am very thankful that I am still around to enjoy days like this one. I get a second chance to enjoy and experience another season of life with the love of my life, with my kids and my grandkids, and with good friends who have been there for me. And hopefully this experience has taught me something. Maybe, just maybe, I can confront the pride that still lurks in the shadows of my life. Hopefully I can be a little more self-aware and be honest with myself and with others. I am finally learning that while pride + denial=stupidity; G (grace) is > greater than either one.